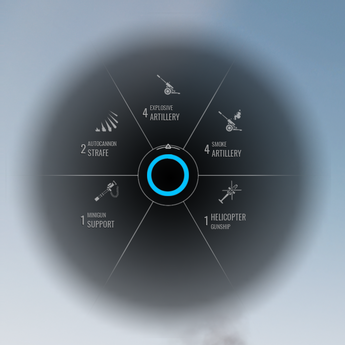 The fire support selection wheel for the Security faction

Fire Support is a mechanic in Insurgency: Sandstorm that involves the Commander and Observer classes coming together to call in various forms of support at a specific location on the map. This mechanic returns from Day of Infamy, New World Interative's previous title and appearing in a contemporary setting for the first time.

To use fire support, the Commander must select their desired option using the fire support menu. Afterwards they equip their binoculars and aim them at the desired spot before selecting. If an observer is within ten meters then the support will be called in. If no observers are nearby then the commander will request an observer and any friendly observers in game will be notified.

If the commander meets these requirements, he or she will order the observer to radio the base for support. The observer will then spend a few seconds performing this. If the observer is killed at any point befores the base radios back confirming the order, the fire support will be cancelled.

Once support has been called, colored smoke will appear indicating to the team the spot it was requested.The color of the smoke will depend on what support was called in.

The Commander must wait for the fire support to finish before they can call in another one. However if there are two commanders present, they can call in fire support concurrently, although having multiple Observers is advised as they can only call in one at a time and the second request will interrupt the first if they have not finished ordering.

It is important to note that both Commanders draw from the same poolof fire support options and as such, the amount of support that can be called in does not change. Some degree of co-ordination is recommended to save rare options for when they really matter.

Fire support does not discriminate between friend and foe; caution is advised not to call it in on top of teammates.

Two fire support options are avaliable to both sides.

Calls in a barrage of explosive mortars which scatter in a large area, killing anyone within. This works very effectively as an area denial weapon.

This can be used a total of four times during a match.

Similar to explosive artillery, covers a large area in smoke. This smoke works the same as other smoke grenades in-game, abliet scaled up. This can concealing large scale movement if placed well. It can also be dropped on an enemy objective to prevent them from seeing the advancing team. While this smoke is completely harmless in itself, it will cause anyone not wearing a gas mask to audibly cough, potentially revealing your postion to nearby enemies.

This can be used a total of four times during a match.

There are three fire support options exclusive to the Security faction.

The fastest fire support option to arrive from being called in. An A-10 Warthog will fly over the map and strafe the targeted area with its cannons.

This can called in up to two times during a match.

A helicopter will hover over the area and shoot any enemies it detects with its minigun. The minigun dosen't have a wide area of effect, meaning it is reasonably safe to call it in near your own teammates without any worry of friendly fire. The helicopter can be shot down by the opposing team. A well aimed RPG can bring it down in one shot.

This can only be called in once during a match so it is a good idea to save it for when it's really needed.

An attack helicopter, armed with cannons and rockets will hover over the area and fire upon the enemy team. The rockets are very powerful with a large area of effect. This can be shot down by the opposing team. While considerably more powerful than the minigun support, there is a much higher risk of friendly fire so calling it further away from your teammates is advised.

Like the Minigun support, this can only be called in once during a match.

There are four fire support options exclusive to the Insurgent faction.

Similar to smoke mortars, except it covers a large area in toxic smoke, creating an excellent area denial weapon. This can be negated with a gas mask, however this costs the Security faction one supply point while being free to the Insurgents.The smoke can also conceal enemy movement although this can only be used twice during a match so using this instead of a smoke mortar is ill-advised.

A salvo of multiple artillery rockets land on the designated area. The rockets deal devastating damage but are largely inaccurate and can land far from the targeted position.